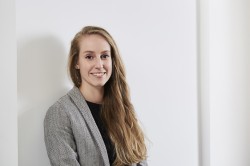 Kelly is our PPE (personal protective equipment) Laboratory Manager at BTTG®. As her title would suggest - Kelly can usually be found in our PPE lab, big smile and long hair tied back, ensuring the smooth running of her department. When she’s not at work, Kelly has her plate full with the renovation project she and her partner have undertaken in refurbishing their new home. Kelly is a lover of the great outdoors, she enjoys skiing and is a keen climber, often travelling for weekends away in North Wales, The Lake District, Scotland or even the Alps to pursue these passions.

When Kelly and I sat down for a (virtual) chat I asked how she’d got into a career in textile testing, “I did a degree in Fashion and Textile Retailing at The University of Manchester, it was a BSc so there was a technical element to the degree and I really enjoyed the testing components of the course – the fashion element, not so much. I then took a few years out and completed four ski seasons and also worked in outdoor clothing which really combined two interests of mine. 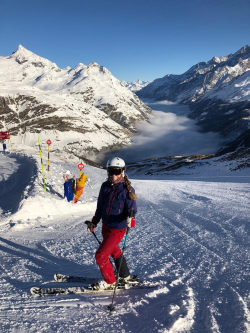 I got to a point where I was looking for more stability and to further develop my interests so I began a Masters in Technical Textiles, again at The University of Manchester. I then fell into a role within the textile supply chain for a company that provided textiles to major high street fashion retailers, this just wasn’t me and I was looking for a job in testing for a long time, it’s a real niche and they don’t often come up so when I saw the opportunity at BTTG® I knew I wanted it.” Kelly joined the company in 2019 as PPE Section Leader and was quickly promoted to PPE Laboratory Manager within a year. A real team player, Kelly was noted for her adaptability, her critical thinking and process management skills so when a management position became vacant, it was felt that Kelly was the obvious candidate; described as “naturally bright, instinctive and quick to catch on” by senior leadership.

Kelly manages two laboratories, ‘Fire’ and ‘Physical and Comfort’, she was quickly able to successfully meld the two labs together and to eradicate the ‘old way of doing things’, putting new procedures in place to simplify the working practices and drive efficiencies within the lab. This proved a particularly significant achievement as shortly down the this resulted in the business coping well with the effects of the COVID-19 pandemic. Early 2020, when the pandemic hit, as a PPE laboratory we were inundated with an influx of requests for the testing of PPE to assist in the fight against the virus. Textile manufactures everywhere were diversifying in order to arm our front line workers with surgical gowns, drapes and masks. Kelly was able to manage this huge spike in workload, which at its peak was four times more than usual. In addition, Kelly also had to ensure teams were safe whilst performing this essential PPE testing in our labs; it was vital to implement shift patterns so that staff were able to remain socially distant – as well as having the added benefit that should one shift need to self-isolate another could continue with the crucial testing work, thankfully this scenario never played out.

The Fire Laboratory tests racing suits and firefighters uniforms, among other things. We carry out a manikin test for firefighters, for both male and female firefighters on both male and female manikins. These manikins are embedded with over 100 temperature sensors and all the electronics that go with that, it’s safe to say that they’re a weighty piece of kit – the test itself is complex and a lot of heavy lifting work is involved. Typically this testing was carried out by male staff but Kelly was the first to challenge that as part of redefining the way things are done within her department. Kelly has proven that she, and rest of her female team, are more than capable of carrying out this work. Now that the surge for PPE testing against COVID is subsiding, the demand has turned to firefighters equipment and Kelly is now leading training for her team of technicians in the Physical and Comfort Lab to undertake the fire tests.

Truly in the spirit of equality, we have both male and female manikins when it comes to testing resistance to flame. Beyond our staff in our labs, we believe that equal opportunities for women absolutely have to extend to the PPE kit they’re provided with because when it comes down to it, it can be a matter of life and death. Until relatively recently, all firefighters turn out gear was developed and sized for men. It is of paramount importance that PPE worn for firefighting fit well, should it not the implications could be life threatening. Air pockets, or ‘voids’,  between layers of clothing are what protect a firefighter from being burnt. Should a women find herself wearing garments that have been designed and fit to the proportions of a male body, during wear areas of fabric would experience stretching, therefore diminishing the garments capacity to include these voids. In this instance, the kit would not offer the female firefighter the same protection as it would offer to a male firefighter. We are proud to be able to offer both female and male manikin tests.

I asked Kelly whether she’d had an opportunity to use her position within the company to help or benefit other women; Kelly told me about a programme called The Girls Network, something she is passionate about.

The Girls Network believes that no girl should have her future limited by her gender, ethnicity, background or parental income. The programme champions that all girls should be supported to realise their ambitions, to discover their self-worth, and to develop their capacity to shape their world and their future. The Girls Network inspires and empowers girls from the least advantaged communities by connecting them with a mentor and a network of professional female role models. Last year, 93% of girls on the programme said their mentor had improved their confidence, and 96% believe their mentor has helped them feel more positive about the future.

Kelly explained the programme led by The Girls Network, describing the support and workshops available as well as her hopes to be able to support young girls in carving out their own successful futures. 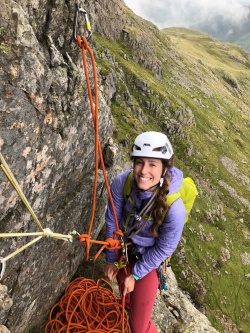 Kelly and I discussed the pressures and challenges women face when it comes to career progression, I asked Kelly whether there were any patterns she’d noticed over the years about women at work?

“I think women almost have to work twice as hard as men in the earlier years of their professional life in order to get their career to a point that they’re satisfied with before they can think about having a family. Of course men have to take their careers into account when it comes to family planning however it’s so different for women; we have to navigate a pregnancy, a birth and that maternity period of recovery and bonding alongside career success and progression and that’s just not something that comes into it for men.”

Our conversation drew on the issue of women and leadership and I asked Kelly how she felt about this in the context of her own career? “You know,” Kelly reflected, “I’ve always been interviewed by men in executive roles, until interviewing for BTTG®. I think within the textile companies I’ve worked for I’ve noticed that it seems to be predominantly women in lower managerial roles and men in the influential executive roles with a seat at the table when it comes to decision making. I think it can be really powerful to work for a company where women have the opportunity to see other women in true leadership roles.”