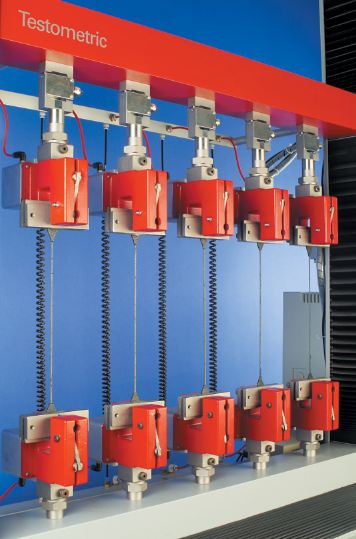 The definition of a geomembrane, taken from EN ISO 10318, is: “Factory-made very low-permeable material made as a synthetic, polymeric or asphalt (bitumen) plate used for grading and building in order to prevent the flow of a liquid and/or vapour through the structure”.

Geotextiles (and geotextile-related products), in contrast to geosynthetic barriers, are basically fabrics which are permeable to fluids such as water and gas.

BTTG™ offer an unrivalled testing service of Geosynthetic Barriers, both polymeric (geomembranes) and clay (geosynthetic clay liners), to manufacturers, consulting engineers, contractors and landfill operators among others.  We are able to perform a wide range of tests.  The tests are co-ordinated and carried out by the High Performance Materials (HPM) department in custom designed premises in Trafford Park, Manchester.  The laboratory building contains three separately conditioned laboratories and a large preparation area with a loading bay to handle samples directly from site and from manufacturers.

The principals of commonly performed tests

Where two or more standards have been grouped together under one heading, the test methods are not necessarily identical, nor would they produce the same results, but they follow similar principals of test.

Specimens of known size are cut and weighed.  Using the weight, area and density (determined by ASTM D1505 or ASTM D792), thickness is calculated.

The asperity height of a textured geomembrane is measured with a depth gauge, the setting block of which rests on top of the asperities while the contact point extends to the sheet’s core thickness.

Specimens of known weight are heated to 600 ˚C in a nitrogen atmosphere; the polymer decomposes leaving carbon black.  The residue is weighed and percentage carbon black determined.

Very thin slices of geomembrane are cut and examined microscopically (100x magnification) for quality of pigment dispersion.  The appearance is compared to a dispersion reference chart.

Specimens for test are clamped between circular rings with a specified internal diameter and a puncture probe of known material and dimensions is pushed centrally against and normal to the fabric at a specified speed until failure of the specimen occurs.  Push through force (N) and plunger displacement (mm) / elongation (%) (where appropriate) are measured.

This test measures the changes in linear dimensions of specimens of known size, when exposed to specific conditions of elevated temperature and time.

Specimens are immersed in a density gradient column and their height in the column compared with standards of known density.

A specimen is weighed in air.  It is then immersed in liquid, its loss in weight upon immersion is determined and its density calculated.

This test measures the rate of extrusion of molten polymer through a die of specified length and diameter at specified conditions of temperature, load, and piston position in the barrel as a timed measurement is made.

Dumbell shaped specimens are extended to break at a constant speed and tensile strength and extension at both yield and break measured.

Dumbell shaped specimens are extended at a specified speed and the load at 2% strain measured.

This test method is designed to measure the force to initiate tearing at a low rate of loading.  The specimen geometry of this test produces a stress concentration in a small area of the specimen.  The maximum stress, usually found near the outset of tearing, is recorded as tear resistance.

This test consists of subjecting a dumbbell shaped notched specimen to a constant tensile load in the presence of a surface-active agent at an elevated temperature.  The time to failure of the test specimen is recorded.

This test measures the amount of water absorbed by the test specimen under defined conditions of time and temperature.

Oxidative Induction Time (OIT) is determined by differential scanning calorimetry.  The specimen for test and a reference material are heated at a constant rate in an inert gaseous environment.  When the specified temperature has been reached, the atmosphere is changed to oxygen maintained at the same flow rate.  The specimen is then held at constant temperature until the oxidative reaction is displayed on the thermal curve.  The time interval from when the oxygen flow is first initiated to the oxidative reaction is referred to as the induction period.  The end of the induction period is signalled by an abrupt increase in the specimen’s evolved heat and may be observed by a deferential scanning calorimeter (DSC).  The OIT is determined from the data recorded during the isothermal test.

This test method covers the determination of the temperature at which plastics exhibit brittle failure under specified impact conditions.

Ten specimens of known dimensions are taken from the seamed sample.  Five specimens are subjected to the 90˚ T-Peel test and five to the shear test, all under specified conditions.